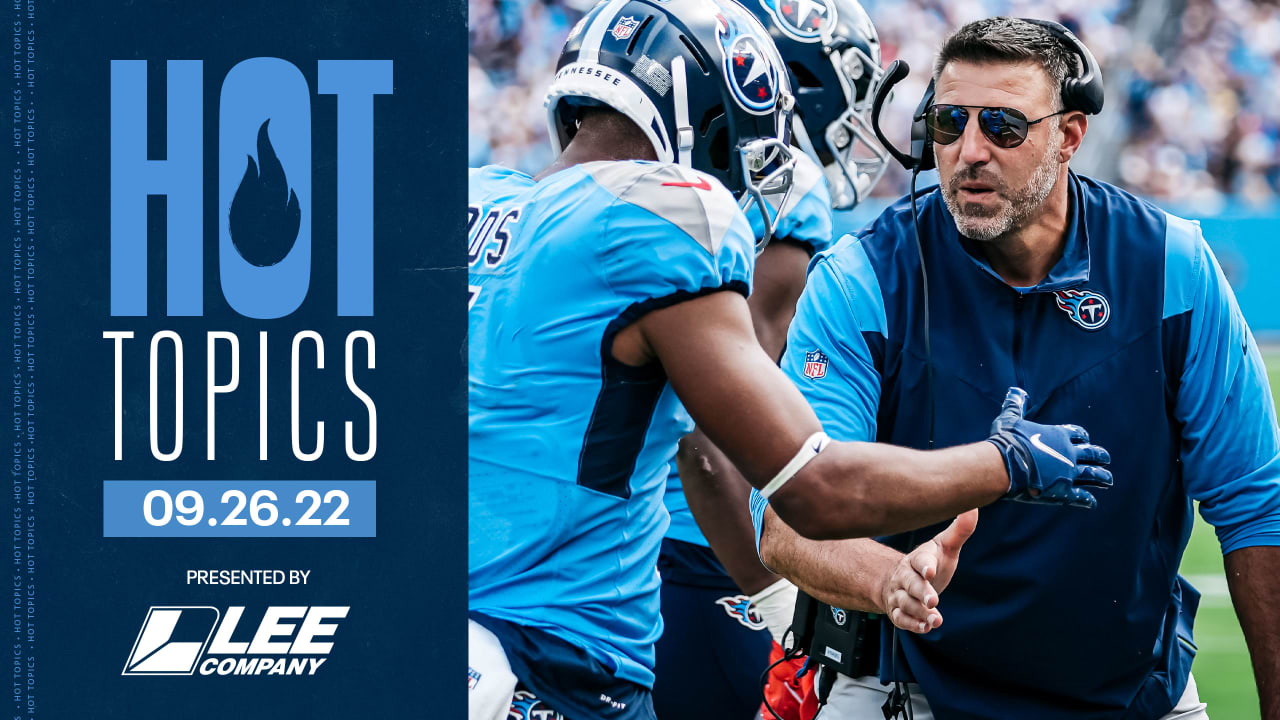 Here’s a look at the hot topics from today’s presser:

-Cornerback Caleb Farley, the team’s first-round pick in the 2021 NFL Draft, played just one defensive snap in Sunday’s game and that came in the closing moments when Kristian Fulton went off the field. Instead, the Titans gave cornerback Terrance Mitchell a big role (he played 53 snaps) after being signed off New England’s practice squad during the week. Vrabel said there has been some growth with Farley, “and we’re going to continue to give him opportunities and make sure he is ready to go and is competing each and every week for the opportunity to play.” Vrabel said Farley will continue to get opportunities on special teams, where he logged seven snaps on Sunday.

-Vrabel hinted the Titans could change things up at cornerback moving forward. Mitchell gave up some plays down the stretch while defending against Raiders receiver Mack Hollins, who caught eight passes for 158 yards and a touchdown. “We just wanted to try somebody else, try somebody new, and give someone else an opportunity,” Vrabel said. “And that may change this week. That’s what it was on a short week, and that could be something different for the game plan this week.” Asked how Mitchell played, Vrabel said: “They caught some balls on him. Obviously, we did the job we wanted to on Davante Adams (5-36) and Darren Waller (3-22), but Mack Hollins really came up big, so give him a lot of credit. We just gave up too many X plays defensively in the second half.”

-Vrabel was asked about the play of his team’s starting tackles – right tackle Nicholas Petit-Frere and left tackle Dennis Daley. Vrabel said Petit-Frere “battles, competes and stays on his feet from him,” and “he tries to finish in pass protection” with his ability from him to stay on the player he’s blocking. “He continues to progress, and I’m really excited about where he’s at,” Vrabel said. “It’s a great place to start and (he needs to) continue to improve.” Vrabel said Daley is still trying to figure out things on the fly, but “he’s doing a nice job competing.” Overall, Vrabel said the offensive line did a nice job overall in protection against the Raiders. “I think he’s only going to continue to get better as well,” Vrabel said of Daley.

-The Titans scored touchdowns on their first three possession of the first half, when they scored 24 points overall. In the second half, the Titans didn’t score. Vrabel on Monday said the turnover hurt (a Ryan Tannehill INT), and some of the gains the team had in the first half weren’t there for one reason or another, including the screen game. “We have to make sure we are better in four-minutes there at the end,” Vrabel said. But the head coach said the three points at the end of the half ended up being key, and “we all just have to make a few more plays offensively, defensively and on special teams in the second half there. We had opportunities in all three phases.”

-Running back Derrick Henry had five catches for 58 yards in Sunday’s game, including a 23-yard reception. Vrabel said Henry got to his spots quickly, and Tannehill found him. “Derrick did a nice job of putting the ball away, and turning it up and gaining some valuable yardage.” Henry had 143 all-purpose yards on Sunday, when he also ran for 85 yards and a touchdown on 20 carries.

-Receiver Robert Woods had is best day as a Titan, catching four passes for 85 yards. Woods also added a 21-yard punt return. “We were able to find him,” Vrabel said of Woods. “Some really cool stuff with him and Ryan. I thought he ran a great route down there in the red zone. … The punt return was something that was really beneficial and really helped us outside the catches that he had.”

-With outside linebacker Harold Landry on Injured Reserve, and OLB Bud Dupree out for Sunday’s game vs the Raiders, Rashad Weaver is getting a lot of playing time. Weaver played 57 of the team’s 70 defensive snaps vs the Raiders (81%) and finished the game with two tackles, a sack and two quarterback hits. “He continues to improve,” Vrabel said of Weaver. “I think he gets tired a little bit in there – he is probably playing too much. But that’s a product of (the defense) not getting off the field and having not many guys behind him.”

-After starting the season 0-2, the Titans are now 1-2 heading into Sunday’s AFC South showdown against the Indianapolis Colts. Vrabel said the mood is better after a win, but said the team needs to keep working. “We are excited about winning,” Vrabel said. “It is hard to win in this league. We are never going to take anything away from winning, we just have to continue to improve and fix the things that we feel like are fixable. We have to find out who is available, who we are going to have, and start to build a game plan and a roster to travel to Indianapolis for a huge division game on the road.”