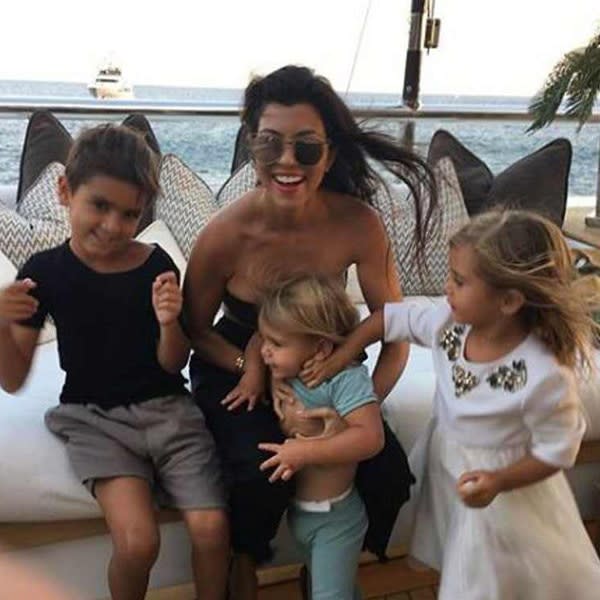 It looks like kourtney kardashian have some tech-savvy kids!

On June 21, the Poosh founder shared an Instagram Story video of her computer’s recent search history, which showed creepy images of ghouls after someone had Googled “the world’s scariest picture.”

But make no mistake, this was hardly a search made by Kourtney. Instead, she shared that one of her little ones of her was the culprit.

Although the mom did not reveal which one of her three kids—Penelope9, king7, and Mason12 whom she shares with ex Scott Disick—was responsible for the horrifying images that appeared on her computer, she was nonetheless amused by her child’s curiosity⁠. “Things being searched on my computer,” she wrote in the caption alongside three laughing emojis. “I know exactly which kid it is.”

Kourtney recently tied the knot with Blink-182 drummer Travis Barker in a lavish Italian ceremony last month. Their union created one blissful blended family where she became the stepmom to landon18, and Alabama16, who Travis shares with Shanna Moakler. Shanna’s other daughter, Atiana de la Hoya23, has also developed a close relationship with Kourt.

On Father’s Day, Travis sweetly shared the way Kourtney’s kids celebrated him on the holiday, posting photos of adorable handwritten cards from Penelope and Reign.

“You are so nice and kind,” Penelope wrote. “You are the best drummer ever. You make my mom happy.”

Reign’s card to Travis included a drawing of two stick figures, which appears to be Travis and Kourtney, alongside a short and sweet note reading, “Dear Travis happy fathers day.”

Kourtney has also left her mark on Travis’ kids as well. Landon recently praised the reality star as an “amazing” person in an interview with E! News’ Daily Pop.

“I love Kourt so much,” he said. “I love expanding the family.”