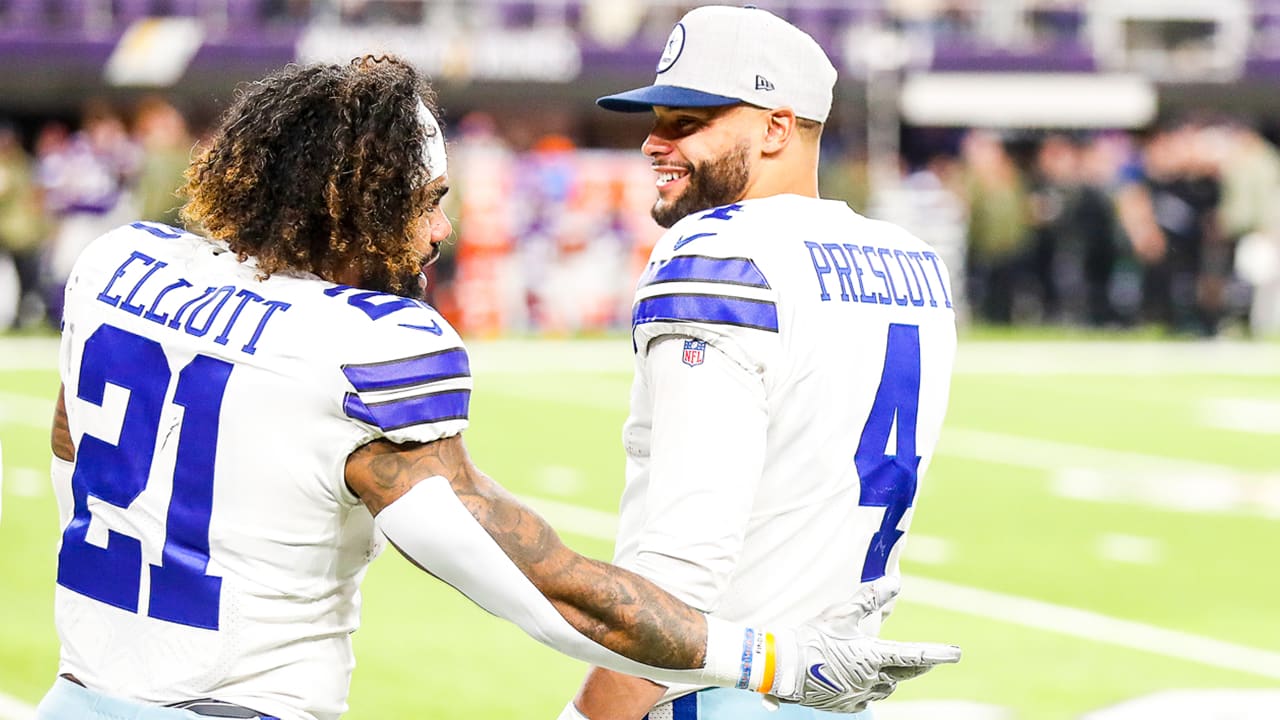 FRISCO, Texas – Here we are, Thanksgiving, and as the old ball coach Bill Parcells taught us when assessing his teams, you basically are who you are once reaching Thanksgiving.

Are they the team that had won two straight once Dak Prescott returned from injury, apparently on a roll?

Are they the team you can’t trust, losing in overtime, 31-28, to the then 3-6 Green Bay Packers, losers of their previous five games?

Or are the Cowboys the team going into Minnesota this past Sunday, stomping out the 8-1 Vikings 40-3, giving them three wins in their past four games while dominating the Vikings in all three phases of the game?

Well, we are about to find out, 3:25 pm Thanksgiving Day, facing the equally 7-3 New York Football Giants, their NFC East compadres they already have defeated the first time around, 23-16.

But none of that matters. Only what happens on Thursday.

So encouraging, right? The defense holding the Vikings to but three points and just 73 yards rushing. Crushing Vikings quarterback Kurt Cousins ​​to the ground seven times, hitting him another 13 when trying to pass.

The offense putting up 40 points, running, throwing, kicking. And face it, since Dak Prescott has returned, the Cowboys offense has scored 24, 42, 28 and 40 points, that’s an average of 33 points a game. And if we factor in Dak needing to get his feet under him that first half of the first game back when scoring just six points, since then, with the Cowboys scoring 18 second-half points in that game, the offense has averaged 36 points in the past three and a half games.

So leave it to Mr. Reasonable, Micah Parsons, to put all this in perspective.

“We don’t want to flash anymore. We have to stay consistent,” Parsons said, referring to that 40-pointer against the Vikings, the defense registering its seventh game giving up no more than one touchdown and the offense actually setting a record scoring on its first seven possessions of a game. “Yeah, we all saw it last week.

“But how can we sustain it? Greatness has to be sustainable.”

Couldn’t have said it better myself. And sure it would be great if the Cowboys could beat the Giants, move to 8-3 and ahead of them into second place in the NFC East, with 10 days before the next game and starting their stretch against the AFC South – Colts, Texans and Jaguars, three teams with a combined eight wins after the first 11 weeks of the season.

Time to take that shot at “sustainable.”

Let’s turn to owner/GM Jerry Jones for this Thanksgiving edition of the last word, when admitting the Cowboys plan on speaking with free agent wide receiver Odell Beckham Jr. after the Thanksgiving game, but not wanting to get into any details of the negotiations. Jerry, as is his purpose, caused a bit of a stir when saying after the blowout of the Vikings that he feels this Cowboys team is a Super Bowl contender.

Well, on Monday, McCarthy had fun with it, downplaying the Super Bowl stuff by saying, “When speaking today with general manager Jerry, he’s focused on the Giants.” But leave it to Jerry to twist the Giants game’s importance and the Beckham possibility into this:

“(The Giants) are our biggest threat we have for the rest of the year, so that’s No. 1, but the same guy talking about going and getting a receiver and going out here and making a move like that right now has to be Thinking past Thursday. Would you think, Beckham, huh? So how do you wear that?

“That’s one of the advantages of being the owner and the general manager because if you’re the guy having to make that decision both ways, you’re cutting the check and you’ve got it all right there in front of you, so when you have the opportunity to strike if it’s there, you can get it.

“That’s the way it’s always been around here.”

and now my shot to day, Happy Thanksgiving.