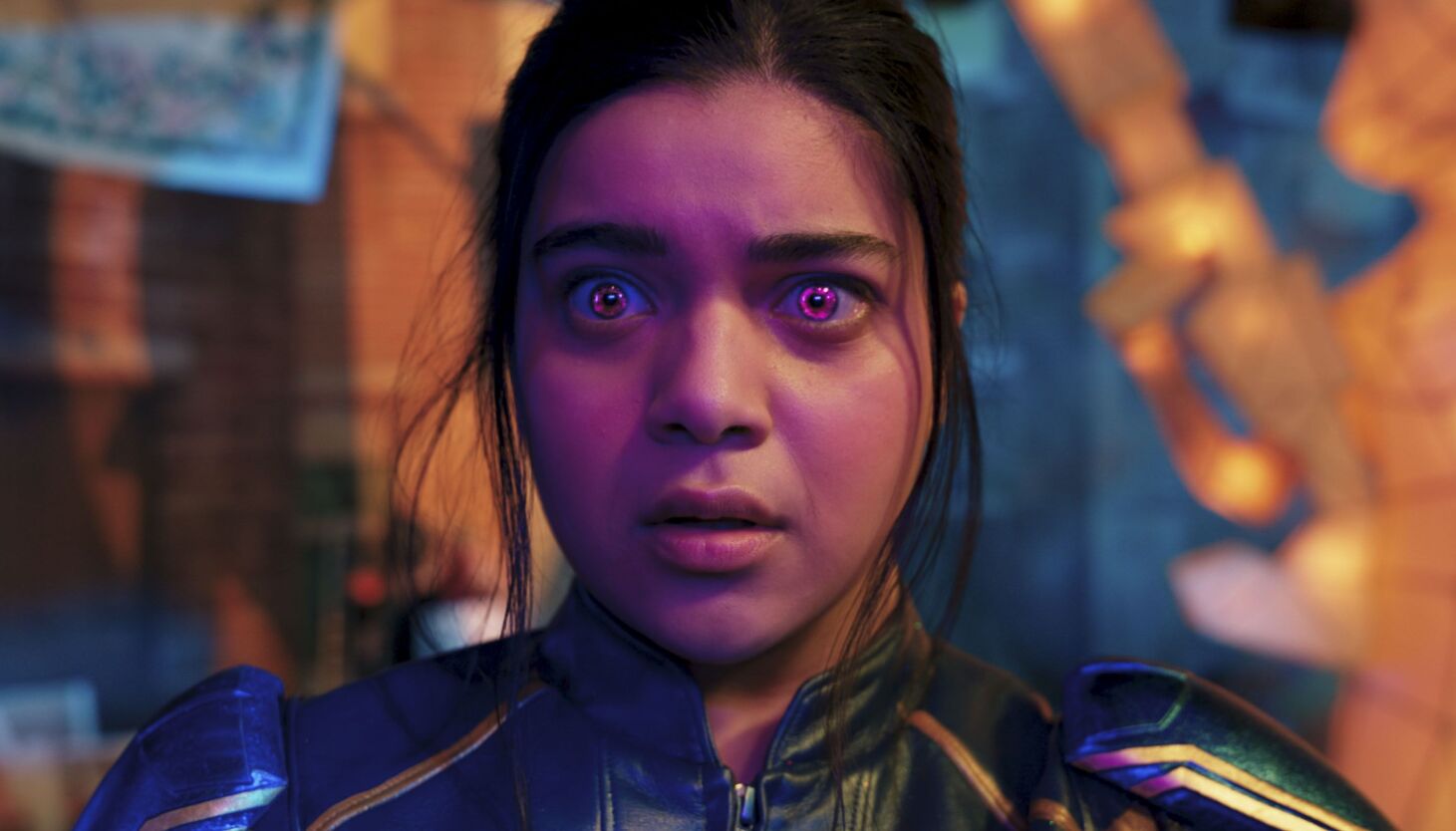 “Ms. Marvel” is available to stream on Disney+ and is rated TV-14.

Her life was simple before something unexpected happened. Now, this 16-year-old thinks she may be related to Thor.

Marvel’s latest offering is about an awkward teenager, Kamala, who — to no one’s surprise — has superpowers. What sets the show apart is its bright South Asian personality of her, centered within the geographical confines of Jersey City.

Created by Bisha K. Ali and directed by Adil El Arbi and Bailall Fallah, “Ms. Marvel” introduces Kamala Khan, a Muslim high schooler who is a “Super Hero mega-fan with an oversized imagination,” according to the Marvel website.

The fact that Kamala, played by Iman Vellani, has powers is only a bonus to an already entertaining show.

Consider the nonstop comic book images that follow her thoughts, reminiscent to Edgar Wright’s “Scott Pilgrim Vs. The World,” as she prioritizes and obsesses over superheroes and AvengerCon and Captain Marvel while ignoring her strict parents, who don’t want to let her out of their sight, a typical trait in South Asian society.

Or her YouTube channel, Sloth Baby Productions, where she posts videos with her doodled art and voiceovers. In Episode 1, “Generation Why,” Kamala promises her viewers a two-part video on whether Thor, another Marvel superhero, is secretly a gamer. (She only has two subscribers for now.)

Movies like “Shang-Chi” and “Black Panther” have a lot in common with “Ms. Marvel” — they’re previously untold stories that are refreshing and insightful into other cultures.

And like Peter Parker, played by Tom Holland, in the “Spider-Man” series, Kamala is just a teen, trying to figure it out.

But this show, in particular, allows Kamala to witness the superhero-magnet that it Manhattan all the way from the safety of Jersey City. This isn’t something other characters don’t always get a chance to do.

“She’s a 16-year-old kid with superpowers. Fine, we’ve seen that before,” said Vellani during a press conference. “But she she’s also a fan of every other hero within the MCU canon and that fascination and excitement is shared with real life Marvel fans,” making her instantly relatable.

“I love that part of her,” added the newcomer actress.

Naturally, the character’s roots as a first-generation Pakistani American create a sense of conflict and duality as she comes of age navigating parental pressures, friendships, crushes and high school drama while trying to figure out what she wants to do with her life.

Mohan Kapoor, who plays Kamala’s dad, described the show as “a wonderful story… of a community that’s so ethnically diverse and culturally rich” subliminally translated through intimate scenes.

In one such scene, Kamala goes to the mosque with her head covered using a scarf. She puts away her shoes in the designated storage by the entrace, washes her limbs, and attends the sermon along with other women. When she and her friend de ella go back to grab their shoes, someone’s stolen them — which seems to be a common occurrence for those who attend the masjid regularly.

Viewers hear sweet Urdu words like beta or bismillahwatch vivid scenes at the South Asian boutique and local halal food carts, and even learn about historically significant orders like the India-Pakistan partition led by the British during the end of their colonial rule — all strung together through Kamala’s journey.

But not everything is so on-the-nose. In part, it comes down to how Kamala is portrayed in the show, with her consistently modest clothing and often braided hair, her liking her chai and the Bollywood actor Shah Rukh Khan, and her taxing fear of disappointing her parents.

The show’s ethnic roots, however, have made it a target for review-bombing on the Internet Movie Database, as the Deseret News previously reported.

Shot in Atlanta, Georgia, and New Jersey, the show currently has only two episodes that have been released, so the origin of Ms. Marvel’s powers are still undisclosed. Kamala’s character first appeared in a Captain Marvel comic (No. 14) in 2012. Readers shortly learned more about her de ella in the Ms. Marvel comics, but her origin story de ella does n’t completely match the approach the show is taking. .

On the printed page, Kamala possessed latent inhuman abilities that became activated through the Terrigen Bomb, allowing her to stretch her body in any way she wanted. But the Disney + series introduces her powers through a bangle, passed on from Kamala’s great-grandmother.

Vellani was also introduced to the character through the comics.

“I’m just excited that people can finally see what I saw when I picked up those comics for the first time and fallen in love with Kamala and her world,” she said during the press conference.

“It’s so colorful and just the fandom of it all. It’s truly a love letter to all the MCU fans, so I’m excited for the reaction,” Vellani added.

As the second episode goes on, Kamala learns how to use the bracelet better and better, thanks to her super-smart sidekick Bruno Carrelli, played by Matt Lintz, and his fancy gadgets.

The actress’ enthusiasm, coupled with original themes in the show, points to a hopeful success for the series while giving young South Asian girls a cool superhero to look up to.

Expect Kamala Khan to make a return in the “Captain Marvel” sequel, alongside Brie Larson and Teyonah Parris.